Skip to content
Home LIFESTYLE Celebrations Halloween in India- A Trick or A Treat??

Halloween in India- A Trick or A Treat??

Halloween- What’s it all about?

It’s that time of the year again when scary legends do the rounds as ghosts and spirits haunt the terrain. Shelves in supermarkets are weighed down with pumpkins, folks dress up in dark colors and spooky, wacky costumes. You’re right on- It’s Halloween once again- the spooky Celtic festival of Samhain. So whip up your scariest costume and paint your faces to face the spirits on the night of October 31. But before we talk about Halloween in India, let’s take a peek into what Halloween is all about!

The Celtic Festival of Halloween is on October 31st

Samhain is a Gaelic festival that relates to the pre-Christian period. It has pagan roots and the Celtic nations (primarily Britain and parts of Europe) celebrated evil powers and witches’ magic. Although it seems absurd today, the Celts believed that during Halloween the ‘veil between our world and the world of ghosts’ became thin. This presumably allowed the spirits to float through and haunt our terrain. Basically then, Samhain means ‘summer’s end’ and essentially the festival of the dead. This period conveniently coincides with the end of the harvest season and beginning of the dark winter. No wonder then that evil spirits and witches’ magic prevailed and the dead haunted the earth on Samhain. So you know where your ghost stories came from.

When Christianity began to gain dominance, the pagan rituals made inroads and Catholics the world over celebrated the festival in a slightly different way. Halloween is a sort of precursor to All Hallows Day or All Saints Day (November 1) and All Souls Day (November 2). The former is a recognition and celebration of the spiritual bond between the living and those who are in heaven. All Souls Day recognizes the sinners suffering in purgatory and celebrates their cleansing and subsequent entry into Heaven. The evening before All Hallows Day- October 31st– is thus known as All Hallows’ Eve, which was later shortened to Halloween. 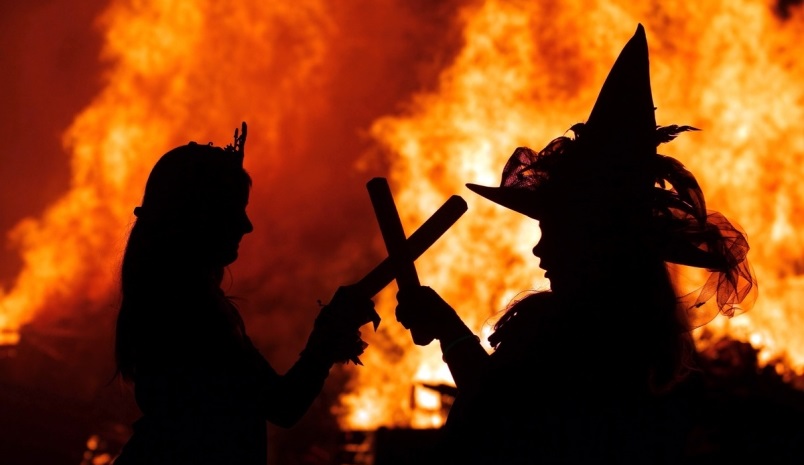 As the spirits and ghosts haunted earth on Samhain, people in villages and towns lit bonfires to keep evil spirits at bay. Young boys and girls would go from house to house to get kindling for the bonfires. Bones of animals and dry crops were burnt as offerings and that’s where the word Bonfire came from- ‘fire of bones’. These fires were generally lit on hilltops in order to make offerings to the gods and appease them. These sacred fires were also meant to drive away the evil spirits, which threatened to bring bad luck to those that had the misfortune to come in their way. That’s why people kept close to the bonfires and their scary costumes were meant to drive away the evil spirits.

Embers from the bonfire were taken home and the hearth fires re-lit with them. Of course, evil spirits could still catch them on their way home. To counter that, scary faces were carved in turnips and gourds and the embers were secreted within. It was believed that the evil spirits would be scared and driven away by the carved faces. Apparently, they succeeded, for the ashes from the sacred fires were gathered the next day and sprinkled across the fields. This presumably prevented the spirits from ruining the seasonal crops. 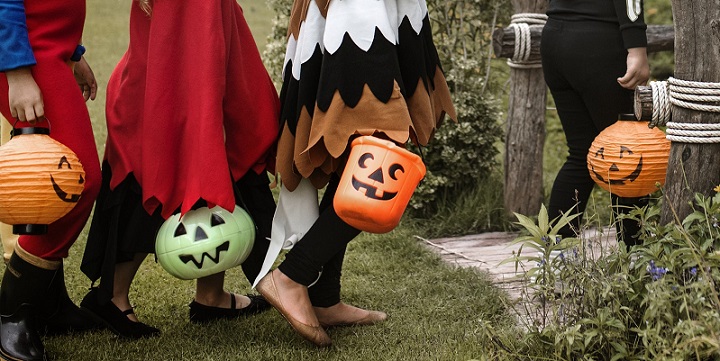 Do you know why carved pumpkins are a symbol of Halloween today? As in ‘everything Halloween’, they too are meant to keep ghosts and evil spirits at arm’s length. Folklore has it that a miserly farmer called Jack chose to play a trick on the Devil himself to evade Hell. When he died, however, there was a ‘no-entry’ sign at the gates of Heaven. The poor guy didn’t have any other alternative but to roam as a ghost on earth. Since a ghost is always scary, people sought to carve ghoulish lanterns out of turnips and potatoes and place them near entry points so that the ghost is scared away! Once Halloween crossed into America, the jack-o-lanterns assumed the shape of pumpkins- a choice fruit in that country!

Bobbing for Apples- The Roman Connection!

If you’re wondering why apples are sold on Halloween- here goes. Halloween has Romanic concoctions too and this happened when the Romans conquered ancient Britain. Pomona is said to be the Roman Goddess of orchards and fruit trees. The Romans decided to merge their festival for Pomona with that of Halloween. As Pomona’s favorite fruit was apples, dunking heads in a tub full of apples became a part of the Halloween tradition. 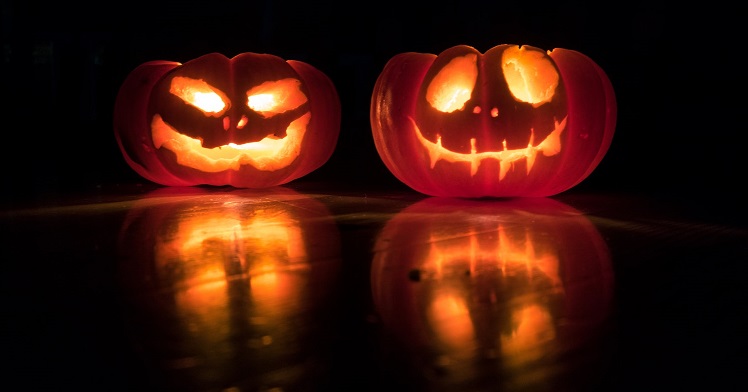 When Samhain was celebrated, villagers did everything they could think of to placate the evil spirits that roamed on Halloween. They dressed in costumes made from animal skins and also sought to appease the unwelcome spirits by offering them good things to eat. With the passage of time, people changed their style of dressing and appeared as ghouls, gory corpses, zombies, witches, and scary ghosts. For the last 100 years or so, children have been dressing up in scary costumes and painting their faces with blood like colors. Going from house to house, they query ‘Trick or Treat’. If they are offered goodies and candy, they go away quietly but no candy means they play a mischief on the house owner.

If you notice carefully, orange and black are predominant- black symbolizes the death of summer and orange the changing color of the leaves and the color of the crops that happens in autumn. 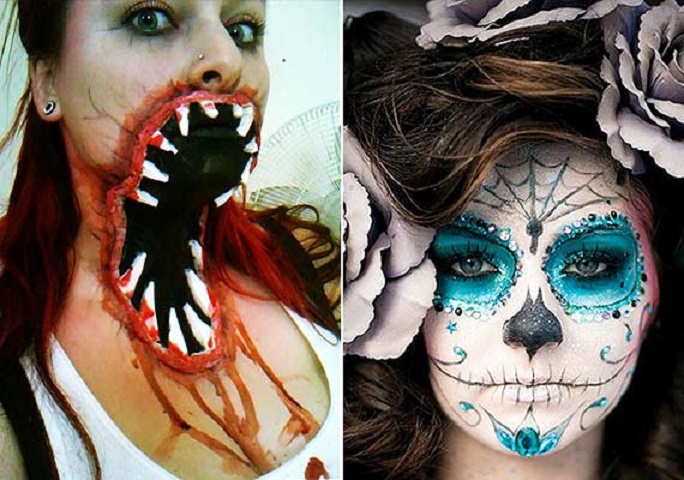 European immigrants brought the festival to America. Indians, addicted to American literature and soap operas lapped up the traditions of Halloween too. Today Halloween parties are a rage and this scary festival is being celebrated with tremendous vigor across the country. DJs perform at the big hotels like Taj and Marriott, which cater to the spookiest of nights. Clubs and restaurants don’t aim to be left behind and host parties till the early hours of the morning. The ambiance is spooky; menus, dishes, and drinks are made to resemble scary creatures and things. Enough to make you shiver and tremble with fear!

How relevant is Halloween in India

India is a country that is steeped in tradition, celebrates gods and goddesses and eschews demons. Thus, Halloween, which is the festival of ghosts and evil spirits may not really find a place. Our festivals generally represent love, color, and lights and relate to the triumph of good over evil, which is quite contrary to celebrating spookiness and horror. Moreover, since we firmly believe that ghosts and demons don’t really exist, Halloween in India is a question mark. We have enough horror to deal with in real life without being further burdened. In addition, the concept of ‘Trick or Treat’ could well backfire, given the psyche of the average Indian, who is wary of strangers. We have enough of festivals to keep us going the year round. Do we really need another one that demands time, money and energy? To each his own!

Be that as it may, don’t let bats enter your house, don’t let black cats cross your path on Halloween. Believe it or not- it may be the devil itself or a gift from a witch!